The permanent exhibition includes four major areas featuring: (1) The natural history of the Nobi Plain, where we are situated; (2) Electron Microscopy; (3) Field work; and (4) Scientific results and on-going research based on Nagoya University's academic activities. There is also an exhibition on "The History of Nagoya University" in the entrance hall, and "Art & Science" in the museum saloon, for relaxation.

Panels and real-life examples of the research of Nobel Prize-winning scientists are shown. 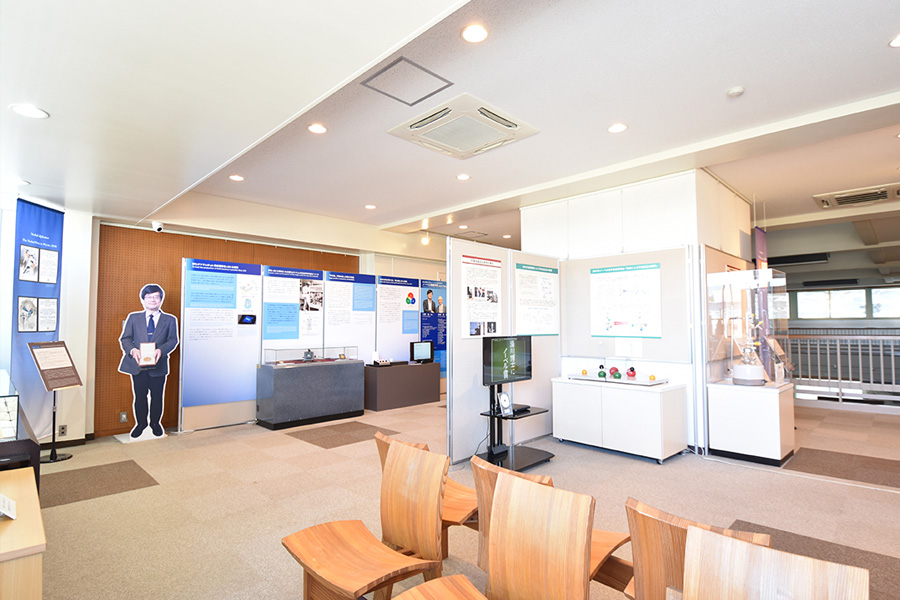 Dr. Ryozi UYEDA, a Pioneer of Nanotechnology, and Electron Diffraction

This Electron Diffraction built with a vacuum-evaporation system was designed by Dr. Ryozi UYEDA in 1940 when he was an assistant professor at the University of Tokyo. In 1942, Dr. Uyeda moved to Nagoya University to begin with the foundation of the Faculty of Science, and he succeeded in the "in-situ" observation of zinc soot-like nanoparticles (less than 10nm in diameter) using the device. Dr. Uyeda stated that "original research requires original equipment" and worked to enrich an engineering workshop at the university's Faculties of Science and Engineering. The spirit has been passed down to Nagoya University today.

Nanotechnology is a science and technology that attempts to create and apply materials of nanometer scale (1 nm = 10-6mm). This Electron Diffraction tells the history why Japan has been advanced in nanotechnology; that is, it is a monumental device. 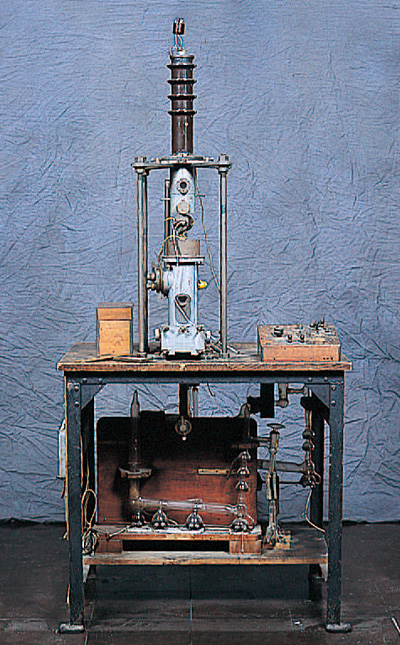 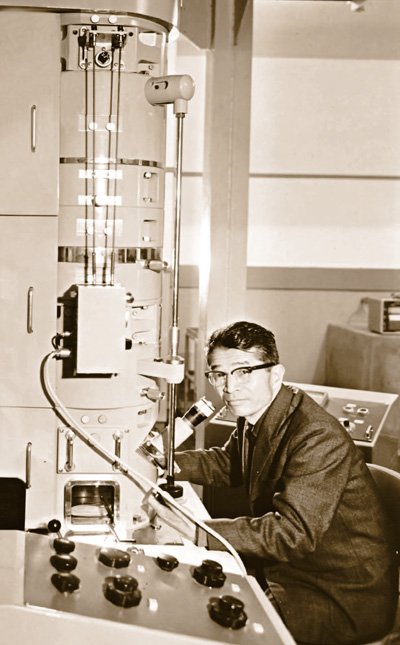 Zoology (A) Skeleton of the Kiso horse

Dai-san Haruyama, which contributed to the preservation of Kiso horse

The Kiso horse is the only native horse breed from Honshu, originating mainly in Nagano prefecture and Hida region of Gifu prefecture.

With their strong legs, Kiso horses rose in popularity as farm horses in the mountains, reaching the number 6,823 in 1899. However, as the war expanded from the Sino-Japanese War to the World War II, measures were taken for the military purposes by cross-breeding between Kiso mares and large foreign stallions. Under the stallion control law enacted in 1939, all Kiso stallions were castrated: the pure-bred Kiso horse was forced into extinction.

After the war, in order to revive the Kiso horse, the pure-bred stallions were sought all over the country. Fortunately, the Kiso stallion named Shin-mei, dedicated to a sacred horse which had escaped castration, was found in Yawata Takemizuwake shrine in Nagano prefecture. Bred with a Kiso mare named Kayama, Dai-san Haruyama was born on April 8, 1951.

Dai-san Haruyama grew as a stallion and contributed to the foundation of the current Kiso breed, producing about 700 offsprings in its life. In January, 1975, when it was 24 years old (about 70 to 80 years old in human years), because of diseases related to the aging such as osteomalacia and jaundice, Dai-san Haruyama had to be euthanized and dissected at the School of Agriculture, Nagoya University.

For the research purposes, the skeleton specimen of Dai-san Haruyama has been stored in Nagoya University Museum. The preserved specimen has been reserved as a standard for the restoration of Kiso horse in the Kaida Local Museum, Nagano Prefecture. 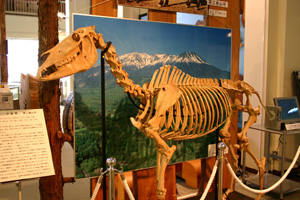 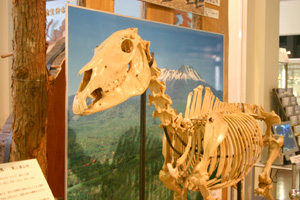 This is the largest specimen of Kiso Hinoki (Japanese cypress, Chamaecyparis obtusa) cut from the village of Kashimo in Gifu Prefecture.
This large Japanese cypress tree is about 950 years old and has a diameter of about 2 m. The rings date from the late Heian period to the early Showa period. Carbon isotope concentrations measured by the Nagoya University Center for Chronological Research over an 800-year period are valuable data for chronological studies. 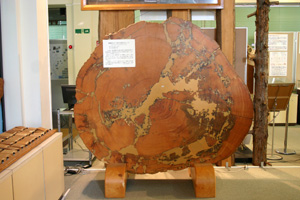 This conglomerate was found in Kamiaso, Gifu-prefecture, in 1970.
Conglomerate is a coarse-grained clastic sedimentary rock that is composed of a substantial fraction of rounded to subangular gravel-size clasts, e.g, gneiss, larger than 2 mm in diameter. This rock was deposited in the sea in the mid-Jurassic (ca. 170 million years ago), while the gneiss in this conglomerate was revealed as the middle of Precambrian rocks (ca. 2.1 billion years ago). Later in research, some similar types of Precambrian rocks have been found in the Northern Korean Peninsula and East China, which supports the idea that Japan was originally a part of the Asian continent. 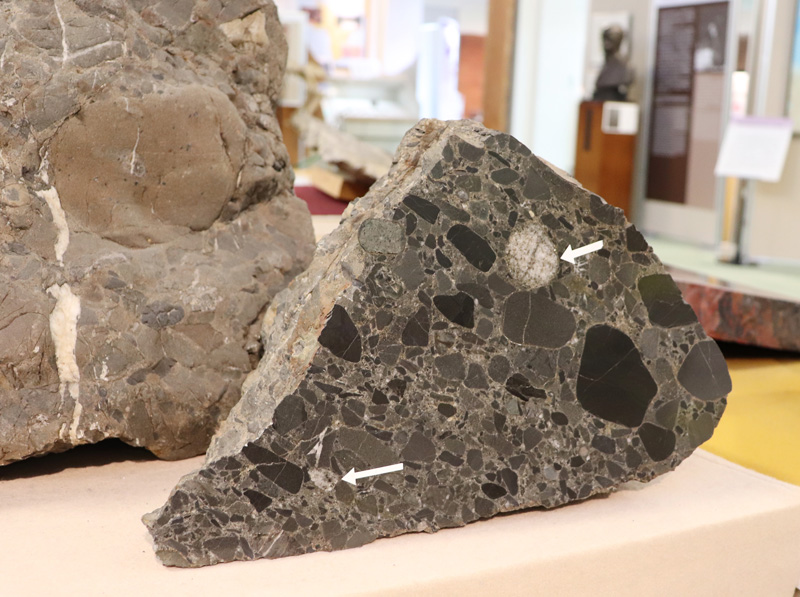 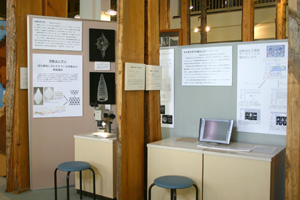 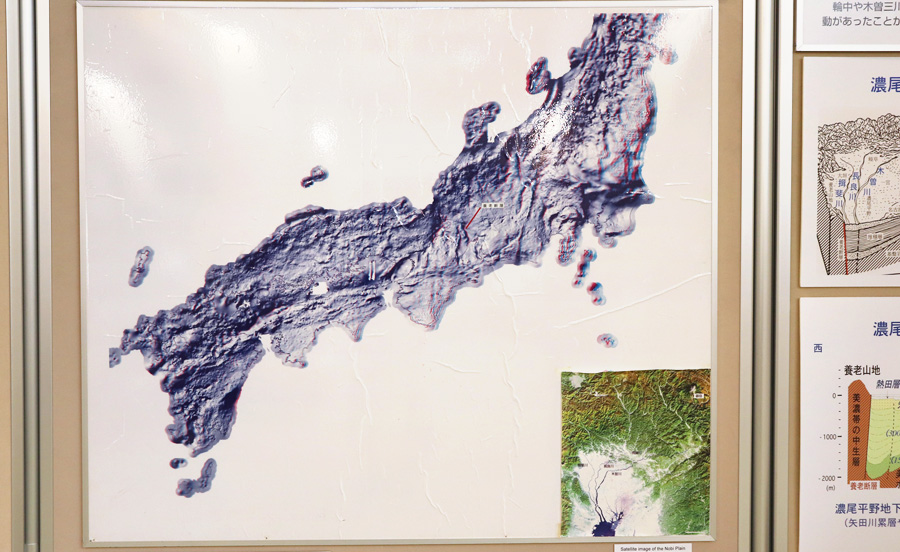 This exhibition shows stone tools collected through the archaeological investigations by Nagoya University in Africa and West Asia. The fieldwork in Africa was started in 1968 by researchers of the Department of Science and the Department of Letters and continued until 1989 mainly in East Africa (Kenya, Tanzania, and Uganda).
The fieldwork in West Asia was started in 2016 as part of the research project 'Cultural history of PaleoAsia' in which one of the faculty members of Nagoya University Museum is involved. The excavations of Paleolithic sites dated to tens of thousands of years ago in Jordan are currently in progress.
Over such a long time, stone tools have been preserved well and now serve as evidence for the history of human evolution. The stone tools exhibited here are important resources for the studies of deep human history. 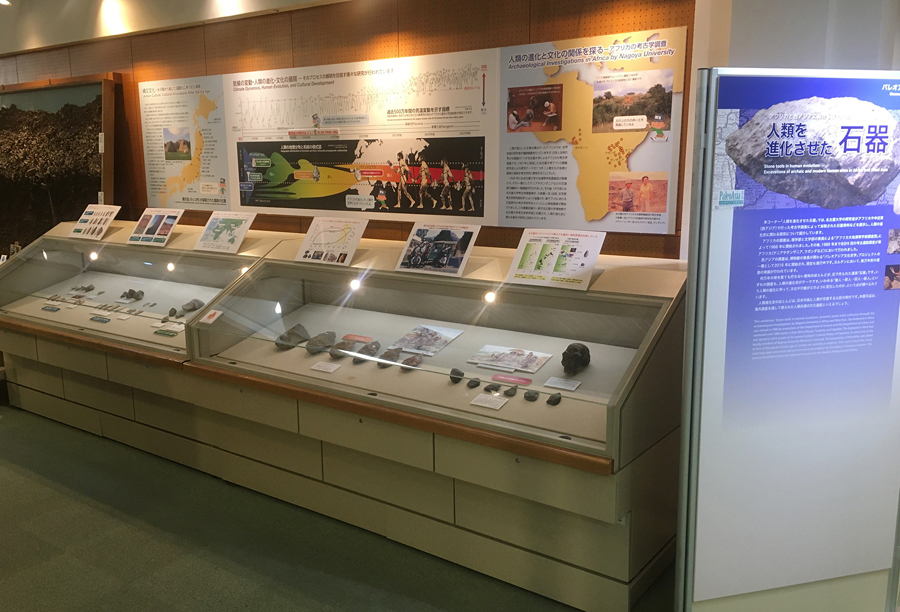 The other specimens Medical moulages

Wax models of pathologic changes of a human body are called moulages.
The moulages were useful for documenting and teaching the symptoms to medical students in the days when color photographs were not available. We house nearly 500 moulages that were once used for the dermatology education at the Nagoya University School of Medicine. Some specimens record infectious diseases that are no longer seen on living human body, such as smallpox, and are a valuable resource for the history of medicine.

Like small pox, some specimens are considered valuable for the history of medicine, recording infectious diseases that are rare to see nowadays. 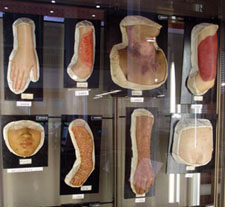